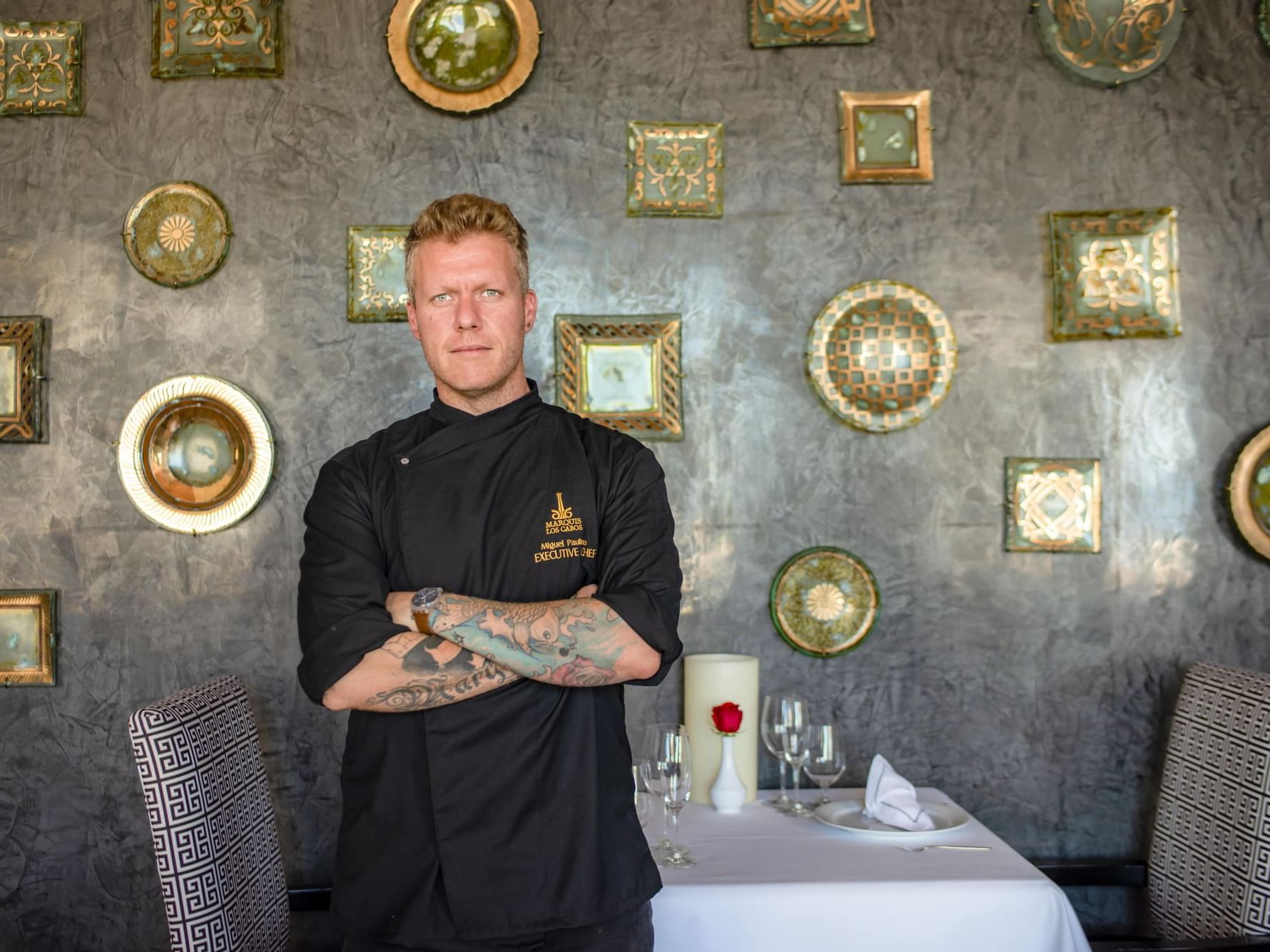 Chef Miguel Paulino has achieved a remarkable trajectory thanks to the incredible creativity that he continuously brings to his culinary art.

Miguel Paulino was born in Portugal in Sao Marcos Ataboeira, where he lived with his grandparents until 14 years old. Sao Marcos is the place he considers as the beginning of his love affair with gastronomy. His grandparents helped him build a very close connection with the cuisine of Portugal's traditions and authentic flavors, a pure cuisine of the land and the sea that his ancestors originated centuries ago.

Today, his childhood experiences are the pillars of his menu design; his reference point of modern gastronomy are well-defined flavors, direct products of the land and the sea with roots in tradition, and reinterpretation of contemporary cuisine.

One foot in the past and one in the present, looking to the future.

With a very creative vision and a search for innovation in his dish presentations, he defines himself as a curious person searching for perfection. He began his professional studies in 2004 in Faro in the Sotavento Algarve region. In this time, he began representing his country in several European competitions, winning a European title in Modena, Italy. When he was only 20 years old, he moved to the Portuguese island of "Azores" to work as a teacher and cook. He soon returned to mainland Portugal to the Monte Santo Resort, where he first accepted a position as a Chef at the age of 23. He later trained in international kitchens in Turkey, Italy, Poland, Spain, London, England, and Istanbul. His experience includes Michelin-starred restaurants in London.

As a Chef, he has managed the kitchens of the Monte Santo Resort, the Crown Plaza Vilamoura, Sheraton Lisboa Hotel & Spa, and Hard Rock Hotel Los Cabos.
During his tenure in Sheraton Lisboa Hotel & Spa, he helped achieve the Panorama Restaurant, the fine dining outlet, the third-place in the list of "The Best Restaurants in Portugal." During his tenure, the restaurant was also awarded Two-Stars from the Repsol "Iberian" guide and 3 Golden Forks. His achievements were recognized when he was named "The Best Young Chef" in Portugal in 2017.

He has trained in different cuisine styles like the molecular cuisine of "El Bulli" during his career. He has also specialized in new techniques for pastry; he has post-degrees in the Development and analysis of menus, Organization of events and banquets, Cost management, and Research in recognized universities in Portugal.
Chef Paulino has shared the kitchen with great names of the culinary world such a Quique Dacosta -3 Michelin stars, Angel Leon "Aponiente" -3 Michelin stars, Nuno Mendez "Viajante" -1 Michelin star, and Joao Rodriguez "Feitoria" -1 Michelin star.

Our Executive Chef Paulino has achieved a remarkable trajectory throughout his career through his dedication, passion for cooking, and incredible creativity that he continuously brings to the culinary offer of  Marquis Los Cabos All-Inclusive Resort & Spa. -C.P.